Posted on August 9, 2011 by "BUGGING" YOU FROM San Juan Island One comment

Last year I had to put together a collection of insects for my graduate course at the University of Florida.  In this photo, I have a Ten-lined June Beetle that I pretty much stole away from a robin that was after it.  The beetle came home with me and I’m sorry to say I put it in the freezer and later added it with the rest of the bugs that eventually got me an “A”.

A few days ago, a friend called me up.  “Would you like another June Beetle?”  he asked.  I drove over to pick it up and afterwards, took a few photos with my new macro lens, fixed up a nice plastic box insect habitat and thought I’d take a few days to decide what to do with it next.

Daily, I peeked into the box.  Not sure what to feed it, I thought a little about whether my June Beetle might be hungry.  Yesterday though, when I looked into the box, I found him buried into the grass.  What was most noticeable to me was the fact that his antennae which had been upwards directed, were now pointing down.  He looked depressed – like he’d just accepted the fate that had come his way.  No! I thought to myself….I can’t keep him locked up like this.  So, grabbing my camera, I took my June Beetle (now named Jerry) outside.  I carefully took him out of the box and set him on a branch propped against a rock.  The sun was shining and warm and almost instantly, he perked up.  Those antennae started to rise, then waved around and spread open into intricately designed fans that were getting signals only he could interpret.

I snapped away with my camera, enjoying the experience of watching life come into him.  It wasn’t more than maybe five minutes and “Jerry” June Beetle decided to try his wings.  His first attempt to take-off failed.  So did his second….but he got it right on the third try and I watched amazed as he lifted into the air.  He rose almost directly upward and as he reached about 20 feet, he circled over me twice before heading over to the big Douglas Fir tree in my yard.  Freedom was his!  And me?  Well, I have come full circle.  You can learn so much more from observing a creature in its natural habitat than in captivity.  Thank you “Jerry” June Beetle.  It was nice making your acquaintance.  🙂 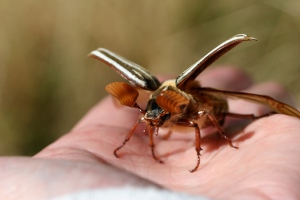 See more of Jerry and his transformation below! 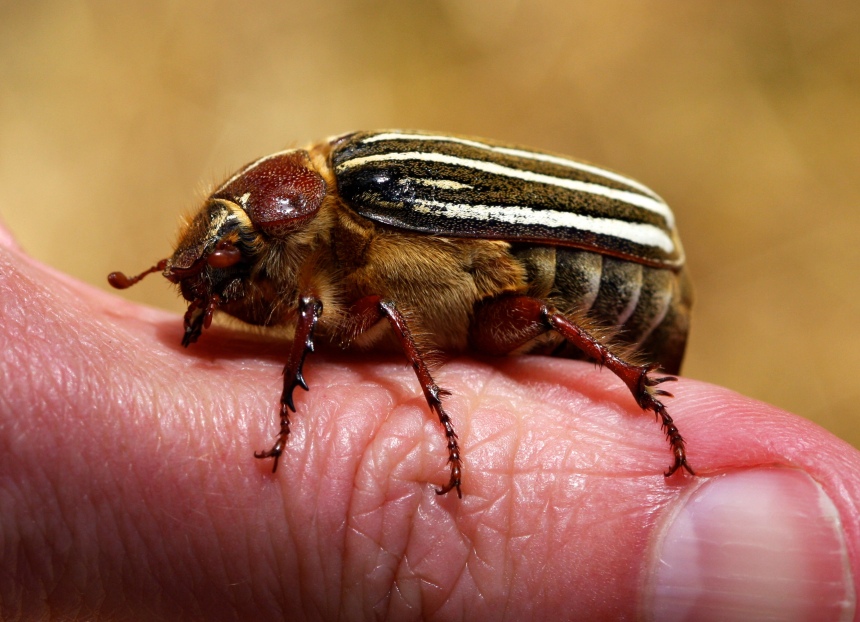 Thank you for setting me free! Love, Jerry the Ten-Lined June Beetle