Posted on September 18, 2011 by "BUGGING" YOU FROM San Juan Island One comment 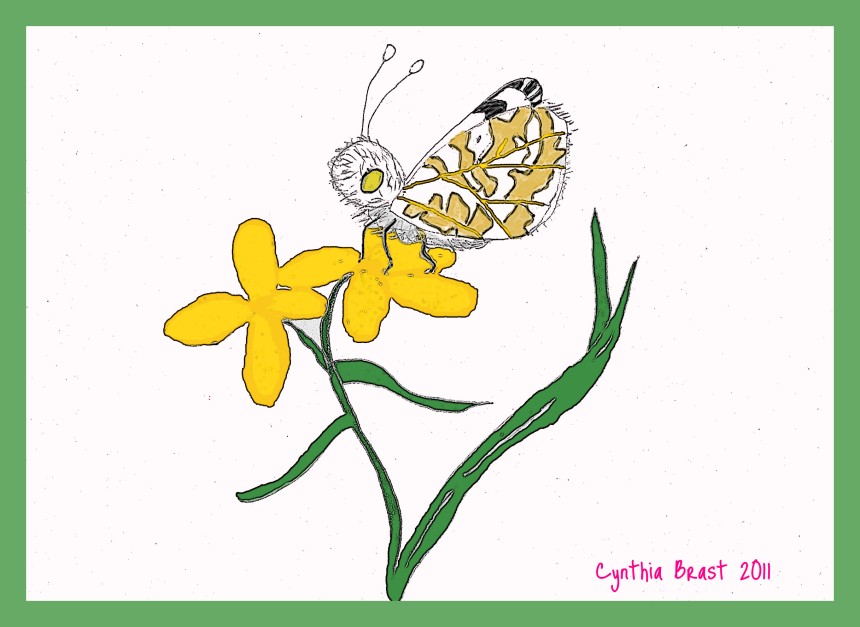 That spring on San Juan Island, the life of one special little butterfly named Iggy began.  Out on the prairie, at a place called American Camp, little Iggy was hidden inside a tiny green egg on the bud of a mustard plant.   Under the sun’s warming rays, everything began waking up from a long winter’s sleep.  It wasn’t long before Iggy began to grow.

With a blanket of colorful wildflowers surrounding it, Iggy’s egg changed colors.  First it turned red, and then an earthy shade of brown.  It was almost time for Iggy to hatch.  That night with only the stars twinkling in the sky, and the moon reflecting its yellow light on the sea, little Iggy chewed his way out of the egg.

The next morning, dewdrops sparkled across the prairie, glittering in the sunshine.   Iggy was hidden in the tall grass, but if you looked carefully you might see him on the mustard plant.   Surprise!  Little Iggy was a caterpillar, not a butterfly….at least not yet.

Wiggling and stretching his many stubby legs, little Iggy caterpillar realized he was hungry!  Starting right there, he had his very first meal.  Iggy took a bite of the mustard leaf where he had just hatched.  Nibble! Nibble! Munch! Munch! Munch!   It tasted so good.  Iggy kept eating, and eating…and eating!  He ate every leaf and flower on that little mustard plant.  And then he ate the leaves and flowers on another one.

While Iggy was chewing a bite of leaf, he heard a little voice ask him,  “Who are you?”  Right there next to Iggy was another little caterpillar just like him.  Her name was Ivey.  She and Iggy became friends.  All summer long, Iggy and Ivey ate lots and lots of mustard plants.

As the days began to change and grow shorter, Iggy and Ivey knew they had to get ready for winter.  Finding tall stems of Velvet Grass, they hid themselves near the bottom, each making a hardened covering over their bodies called a chrysalis (chrys·a·lis) to protect them and keep them warm until spring.

That year when winter came it covered the ground with a blanket of snow, but Iggy and Ivey were snug and safe while the winds blew salty sea spray across the prairie.  Eventually, the snow melted and rains came.  The days were dark and most of the time, all was quiet.    Eagles flew overhead searching for food.  Once a hungry fox hunting a small, mouse-like creature called a vole for his dinner, dug and sniffed near Iggy’s and Ivey’s hidden homes on the stalks.  Another day a cottontail rabbit munched grasses right next to them until the shadow of the hungry hawk frightened it into its burrow.

Finally the day came in May when Iggy and Ivey felt the warm sun again.  Spring was here and it was time to come out of their woven winter blankets.  Chewing open their chrysalis coverings, first Iggy then Ivey peeked out.   Something had happened!

Iggy and Ivey weren’t caterpillars anymore.  Unfolding behind them in the sun were beautiful wings.  Wet at first, Iggy and Ivey slowly stretched, then angled their new wings to dry as they basked in the rays of the warm sun.

Iggy tried opening his and looking over his shoulder, he saw them.  Fragile, creamy-white wings dappled with beautiful dark marble coloring.  Ivey’s wings were beautiful too.  Hers were yellowish-white, with the same marble patterns.  “Let’s see if they work,” said Iggy.   Off they went, fluttering straight across the prairie faster than they could have imagined!  “Look at me!”  Ivey called to Iggy.

That evening, the sun began to sink in the horizon.  Iggy and Ivey flew over to watch the sunset over the ocean as the day came to an end.  They didn’t see any other butterflies like them that day, or the next, or even the next after that.    Iggy told Ivey they were “rare.”  “That means we might be the last two Island Marble butterflies on the prairie, “ he said.   BUT…

Before long, there were tiny little green eggs dotting the leaves and buds on the mustard plants.  And do you know what? Next year, even though Iggy and Ivey were gone, hidden at the bottom of the stems on some Velvet grass, there were eight chrysalides (chry·sal·i·des) about to open and when they did….Iggy and Ivey’s children emerged with beautiful creamy white and yellow marbled wings.

While not endangered, the Island marble butterfly (Euchloe ausonides insulanus) is ranked as critically imperiled.  Thought to be extinct, the Island Marble butterfly was historically found on Gabriola Island and Vancouver Island, B.C. and had not been sighted since 1908.  However, in 1998, a population was found at San Juan Island National Historical Park ~ American Camp on San Juan Island, WA.  Surveys conducted indicated that Island Marble butterflies had a few other scattered populations on both San Juan Island and Lopez Island, but with no more than 5 individuals found at each location.  The only viable population existing is found at American Camp.  Conservation and recovery of the species is critical if it is to be preserved for future generations to appreciate.  Management of prairie habitats without use of harmful chemicals, protection of mustard plants on which Island Marble larvae feed, along with support of the Garry Oak ecosystems are vital to facilitate a recovery of the population.

New words for you to learn:

Text and photographs copyright 2011 by Cynthia Brast.  No part of this story may be reproduced in any form without the expressed written consent of the author.