Posted on April 22, 2021 by "BUGGING" YOU FROM San Juan Island Leave a comment

This little guy got into my pants yesterday! 😁 What is it? This is a Treehugger Soldier Beetle (Dichelotarsus piniphilus) in the family Cantharidae or soldier beetles ( because their wings resemble military uniforms). More interesting though is the Greek translation of Cantharis or κανθαρισ, translating to ‘blister beetle.’

I’m pointing this out because this little Treehugger got confused yesterday and when it was hugging my leg and my pants were hugging back a bit too tightly, it either bit me or exuded some of the defensive chemicals that they use to repel would-be predators . In either case, I was fine aside from a bit of a temporary stinging sensation.

This species is common in the west. Surprisingly, very little is known about the life histories of these beetles. I’ve spotted them on nettle this time of year. Adults are known to feed on insects (including aphids), nectar, and pollen.

I wondered if there is some uptake of the chemical constituents of the nettle to produce the defense secretions in the beetle, either via consuming pollen from the nettle, or via feeding on another insect feeding on the nettle. A literature search failed to yield any supporting information, though I did find an older publication listing insects found in association with nettle. Quite a few were some of our lovely Lepidoptera, so you might want to leave those nettle patches instead of clearing them away 🦋

Posted on April 16, 2019 by "BUGGING" YOU FROM San Juan Island One comment

I walked down the road last Tuesday (April 9, 2019) with my husband.  It was late afternoon and although it rained a bit earlier that morning, the sun was peeking out.   The wind wasn’t blowing, but it was soon to be a Blistery Spring day!

If you know any entomologists, you’ll understand rule #1 about going on ANY walk is to take a collection jar and a camera.  Last week, I failed to do this and missed an opportunity to identify and document this very cool bumble bee mimicking fly (genus Laphria ~ a bee-like robber fly).  This time I made certain to take my phone.  Sure enough, at the bottom of the hill, I see a black beetle crawling about on the chip-sealed road.  Fortunately, I refrained from my very bad habit of grabbing things with my bare hands. This is one beetle you do NOT want to pick up!  It was a BLISTER BEETLE.

Lucky me! I came home with some great photos and some video footage instead of a dermatological eruption that would have landed me in the doctor’s office.  I left the beetle in the road to continue whatever it was doing.

Back at home, I used my reference books to compare the photos and video I took of the beetle and narrowed down an ID to the genus Meloe.  I would need more help figure out the species.  I sent some photos off to Merrill Peterson at WSU with the suggestion that it might be a male Meloe niger.  Merrill wrote back that he thought it was M. strigulosus, but hard to confirm with only a photo.  He agreed it was indeed a male.

You might ask how one goes about determining whether a particular beetle is male or female.  Often, as in this case, the male antennal segments are larger or varied in shape from the female.  This beetle’s antennae had a distinctive kinked platform on their fifth segment.  I would learn later that this kinked part enables them to grasp the antennae of the female during mating.

Merrill also sent me a link to what I will refer to as the Blister Beetle bible.  Published in 1970, this research was compiled by the legendary systematics entomologist, John D. Pinto, currently professor emeritus at U.C. Riverside with Richard B. Selander.  Hopeful, I sent off my photos in an email to Dr. Pinto and felt really privileged when I got an almost immediate response.

According to Dr. Pinto, the specimen I photographed was indeed a male Meloe strigulosus.  If you’re interested, you can read “The bionomics of blister beetles of the genus Meloe and a classification of the New World species”by linking here https://archive.org/details/bionomicsofblist42pint  Aside from the wealth of information published in this book, I love the artistic rendering of the female beetle on the cover. 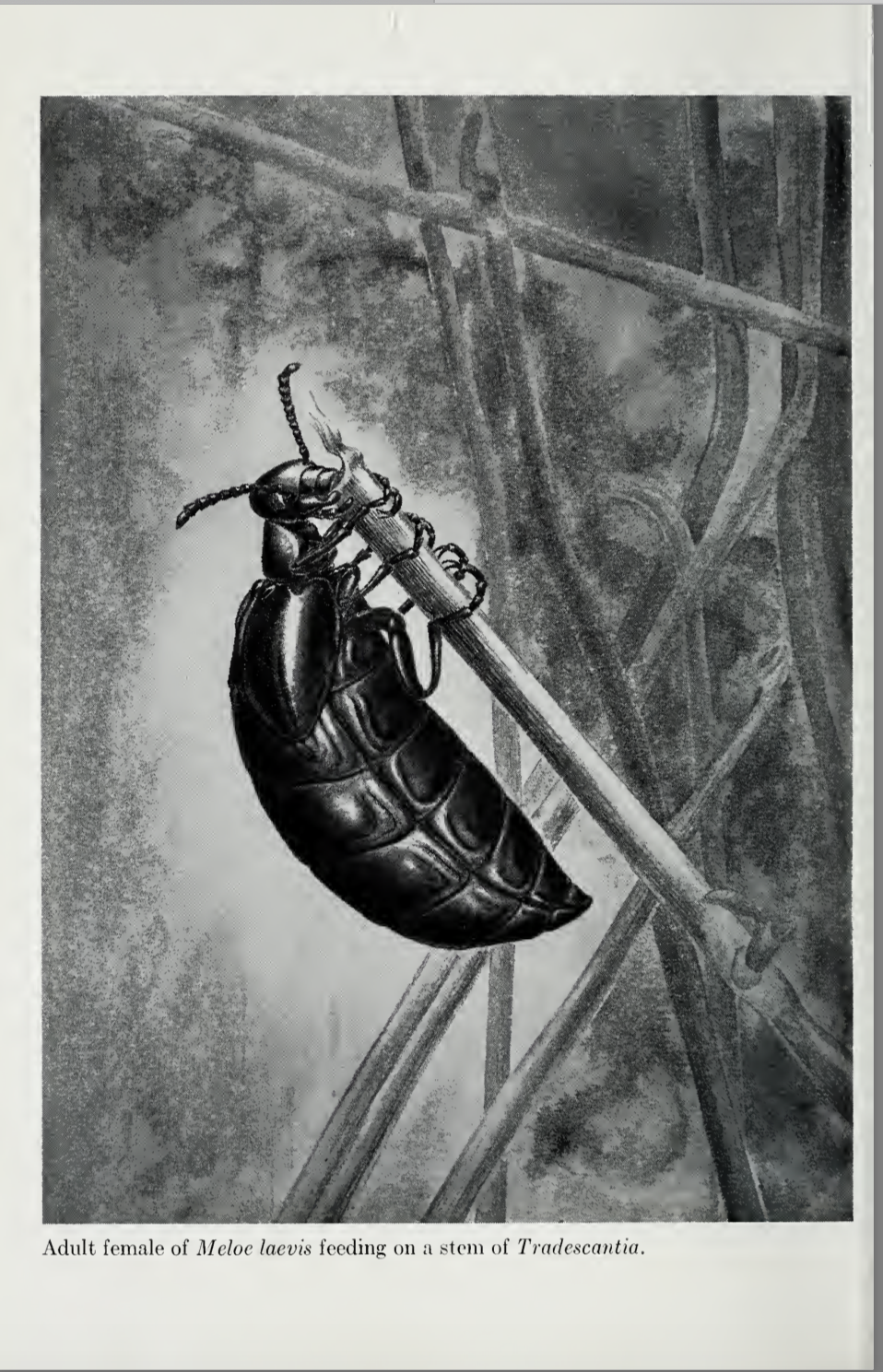 Illustration from Pinto and Selander’s “The bionomics of blister beetles of the genus Meloe and a classification of the New World species.”

According to Dr. Pinto, there are 22 species of Meloidae in North America.  They are named Blister Beetles because they release a toxic terpenoid blistering agent called cantharadin when they are threatened or handled.  Sometimes people call them “Oil Beetles” because it’s oily. You can find the chemical profile of cantharadin here ~ https://pubchem.ncbi.nlm.nih.gov/compound/cantharidin#section=Drug-Indication

Curiously, this toxic secretion has been utilized to treat various medical conditions.  Among these was the topical application of the “oil” to treat rheumatism or to remove warts and lesions of Molluscum contagiosum, a contagious, viral infection of the skin (https://www.mayoclinic.org/diseases-conditions/molluscum-contagiosum/symptoms-causes/syc-20375226).  Cantharidin is also famously known for its use as an aphrodisiac (Spanish Fly).   This substance was historically used as a treatment for hydrophobia (rabies).  Male beetles were preserved in honey, mixed with other equally toxic ingredients then administered in an attempt to cure the patient. Maybe dying from cantharadin poisoning was less traumatic than dying of rabies.

Blister beetles are economically important because they contaminate alfalfa hay and they are highly toxic to livestock, especially horses.  There are instances where a horse has died from ingesting just ONE beetle. According to this Colorado State Extension publication (https://extension.colostate.edu/topic-areas/insects/blister-beetles-in-forage-crops-5-524/), just the release of cantharadin oil from the beetle can contaminate the hay.  Although reports of cantharadin poisoning in livestock are rare in the West, here’s one case where someone’s goat became very sick from ingesting hay contaminated with cantharidin ~ https://www.vetmed.ucdavis.edu/news/uc-davis-veterinarians-discover-blister-beetle-toxicity-goat

Another interesting fact about these beetles is that the larvae are phoretic parasites of solitary bees and grasshopper egg pods.  The first instar larvae, called triungulins” crawl onto flowers to await a visiting bee, then hitch a ride back to the nest where they will consume the pollen, nectar, and even the bee larvae.  Check out this link from National Geographic to view some extraordinary images of bees covered with blister beetle larvae ~ https://www.nationalgeographic.com/animals/2018/09/bees-blister-beetles-evolution-parasites-pheromones-news/

This was the first blister beetle I’ve seen on San Juan Island, but I do know of one other sighting by San Juan County Land Bank steward, Doug. M. from April of 2016.  I sent the photo of Doug’s beetle to Dr. Pinto as well and this was his reply, “Very likely M. niger – tho the photo is a little fuzzy for positive ID.”  Doug’s photo of the “likely” M. niger below.

If you’d like to read more about the particular species of blister beetle I found, I’m including the taxonomic key and geographic distribution data from Dr. Pinto’s book below.

Direct Key To The New World Subgenera of Meloe 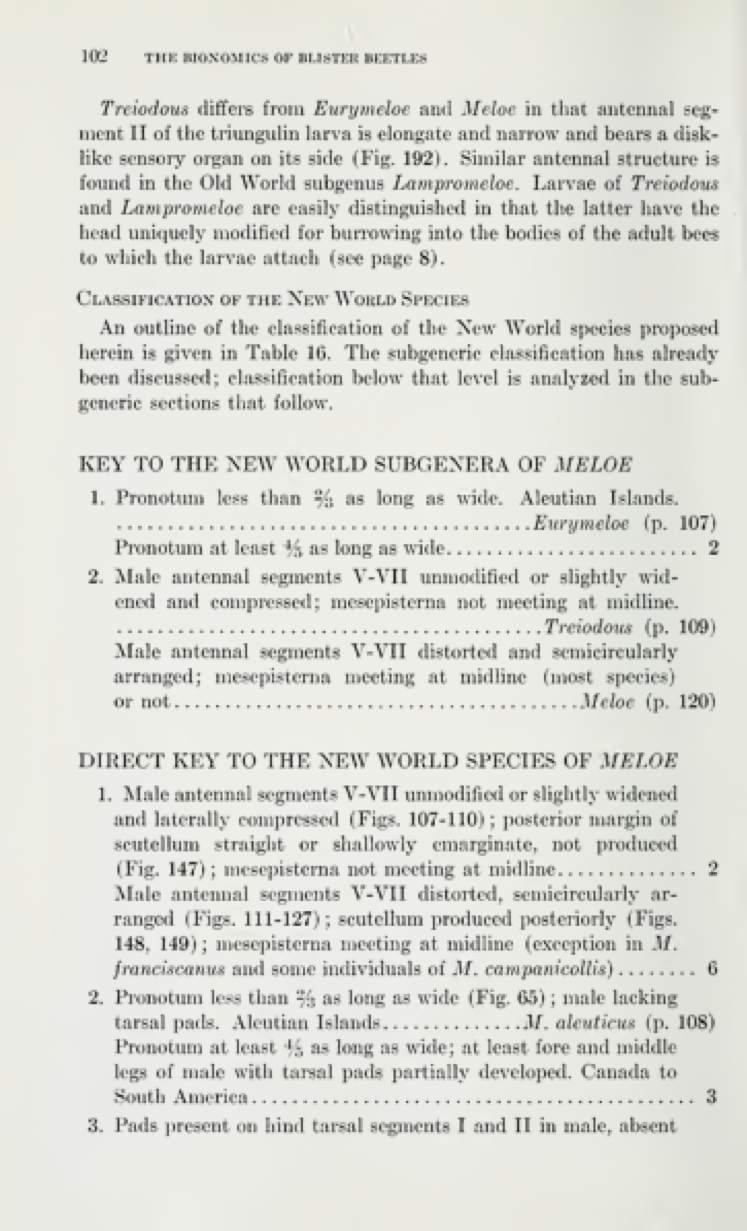 Key to New World Subgenera of Meloe Pinto and Selander, 1970

Direct Key to the New World Subgenera of Meloe page 104 Pinto and Selander, 1970

Key to Groups Bionomics of Blister Beetles Pinto and Selander, 1970

Key to Groups Bionomics of Blister Beetles Pinto and Selander, 1970

Pinto, J.D. and R.B. Selander. 1970. The bionomics of blister beetles of the genus Meloe and a classification of the New World species. Illinois Biological Monographs 42: 1-222.  https://archive.org/details/bionomicsofblist42pint